In many children’s rooms there are: Toniebox, a children’s audio system that is increasingly replacing a CD player or cassette recorder. Now the company behind it, Boxine, wants to do a joint cause with venture capital firm 468 SPAC I SE and go public.

The company behind Tonies’ children’s sound system, Boxine, wants to team up with venture capital firm 468 SPAC I SE. It is about the merger of the two companies, through which the shares of Boxine will be traded on the Frankfurt Stock Exchange in the future.

468 assumes a valuation of Boxine at 1 billion euros, the company announced in Luxembourg. It is said that talks are still ongoing, so no final statements can yet be made on whether a similar agreement will be reached.

By merging in the stock exchange

468 SPAC I SE is a company called Spac (Special Purpose Acquisition Company), a company that was formed in order to later bring other companies to the stock exchange through mergers.

Young companies in particular hope for faster IPOs and lower costs. However, experts see such transactions as particularly risky for investors in view of the high level of uncertainty.

Tonies was launched in 2016 by Patric Faßbender and Marcus Stahl. Since then, Toniebox has replaced CD players or cassette recorders in many children’s rooms.

See also  The most important facts and developments

The soft cube with a digital core is easy to use: the radio starts up immediately by setting audio formats like Benjamin Blümchen or Räuber Hotzenplotz.

Toniebox in its colors is suitable for children from three years old. The audio system is available in Germany, Austria, Switzerland, Great Britain and Ireland, and since September 2020 in the United States as well. 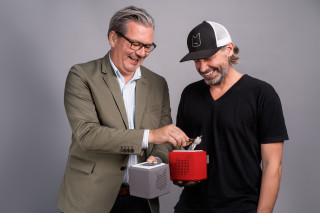