The Washington Post, a major American newspaper, conducted a survey of more than 1,000 participating Internet users from the United States. In this, people were asked how much they trust the listed companies or services to handle their personal data and information about their internet use responsibly.

Of those who took part in the survey, 44 percent said they would have “great confidence” in Apple, while Google and Amazon ranked 48 and 53 percent, respectively, in the top two places. Survey respondents from Facebook and TikTok were less enthusiastic: In the “little/no trust” category, the two services received 72 and 63 percent of user responses, respectively. These are the highest percentages across all nine identified technology and service companies. For comparison: Apple and Amazon took the last two places (= the best) with 40 percent each. 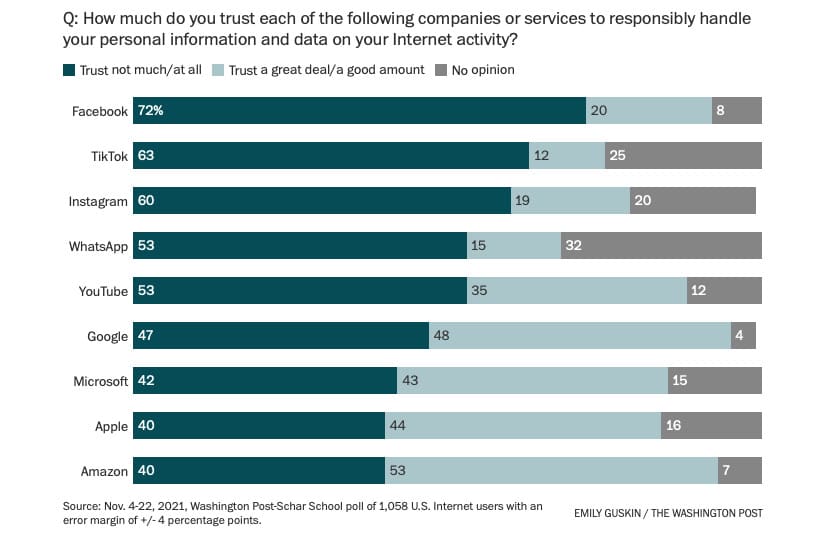 However, it is interesting to see that US Internet users trust companies like Amazon or Google more than they trust Apple. In the Washington Post article After all, he notes that Amazon chief Jeff Bezos is the owner of the newspaper. Is this where the good Amazon survey results come from?

‘We know we can’t really trust them’

In the past there have been at least some data breaches and major security risks regarding user data from Amazon and Google. Above all, corporate smart speakers, the Amazon Echo Band and Google Nest, have often been criticized for their insane data-collecting madness and their extreme curiosity when listening to conversations. However, when an American citizen of Texas in the article speaks the words

“We know we can’t really trust them, but I don’t think we can avoid not using them. I tried to give up Facebook for a while. … It’s not really something you do to be able to continue to live a normal social life.”

On the topic of technology and the companies involved in it, the importance of privacy and data protection in the United States is probably not too far off. Despite the increased use of social media, especially Facebook, 64 percent of the US population “believes that the government should do more to curb big tech companies,” according to a Washington Post report. It would be interesting to see what results such a survey would show in Europe or Germany.