(Motorsport-Total.com) — At Silverstone, Alex Espargaro took his second MotoGP podium last weekend and a first for Aprilia in the modern era. The podium came after comments from Espargaro that Maverick Vinales’ arrival in Aprilia would prove to be one of the top three riders in MotoGP himself.

When asked about it after his success at the British Grand Prix, the Aprilia driver explained what he meant by that. “I didn’t say I was one of the top three riders in MotoGP,” Espargaro explains. “What I said is that at that moment I feel like I’m driving at a very high level, in the top three in the current moto class.”

“I really think it is. But this is a sport in which you have to have a good motorcycle to prove it,” continues the Spaniard. Although he is now in his 10th motocross season, he has never had a “real motorcycle” before to have a say as a rider.

Alex Espargaro: “You don’t have a winning motorcycle yet”

Now he is on the best way to get there with Aprilia. “When Marc (Marquez; editor’s note) followed me into qualifying (at Silverstone), I thought: ‘Wow! In the last six or seven years, I’ve been the one who’s driven after him thousands of times,'” Espargaro recalls.

“This is new to me, but of course it makes me very happy. The important thing now is not to give up. The bike is not a winning bike yet, but we are on the right track. Silverstone is a tough track and we have proven that Aprilia is doing well here. So we have to keep going.”

Photo Gallery: From RS-Cube to RS-GP: All Aprilia MotoGP bikes since 2002

The biggest weakness was quickly identified: “At the moment I still use the rear tire a bit more than the other tires because we still have an acceleration deficit. That’s why I have to open the gas earlier than the other tyres. So there’s still room. Very happy with the progress.”

The podium at Silverstone is the best guide. Especially since Espargaro had to fight hard for it. “What makes me especially happy is that this podium did not happen in a wet or fall race,” the Spaniard confirmed. 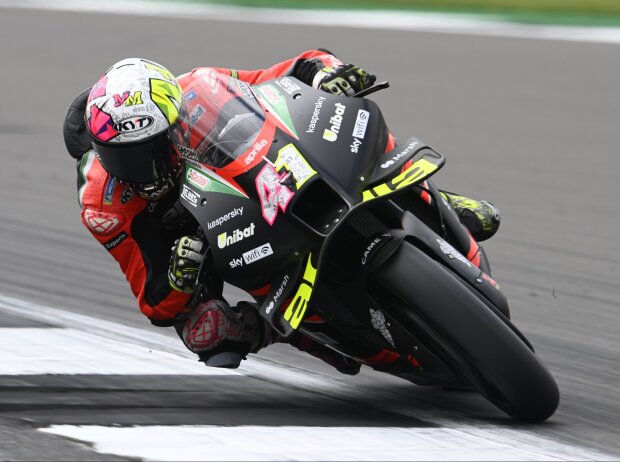 Aprilia now has reliability under control, will more platforms follow in 2021? Zoom

“I am sure that without these engine problems we will be able to fight for the top three in the championship. Because if you look at the points, we are not far away.” With 83 points, he is currently in ninth place.

“No one is faster than me – except Quartararo”

Espargaro wants to use the momentum and assert his strength in the upcoming races. “I know it won’t be easy. It’s not a matter of course that I fight for the podium in every race. But I think we’re closer than ever,” he showed himself fighting back against Aragon, Misano and Co.

“And as I said, I think every MotoGP rider is on the same level now, except for Fabio (Quartararo) who is one step ahead. But I don’t see anyone faster than me now, except for him. So I hope to be on the podium in the next races as well.”