Andriy Yarmolenko of West Ham broke down in tears after his 1-0 goal against Aston Villa. Photo: NurPhoto / MI News

“It is very difficult for me to think about football now because the Russians are killing Ukrainian people in my country every day.” With these words, Ukrainian footballer Andriy Yarmolenko appeared in front of the cameras after his team West Ham United’s 2-1 victory over Aston Villa.

The former Borussia Dortmund player took the initiative to win at home. But it was Yarmolenko’s goal celebration that caused such a stir, when he got to his knees and burst into tears. “It was very moving,” the 32-year-old said after the final whistle.

“I honestly don’t know what to say. Just like this, very emotional. I just want to thank my teammates who support me every day.”

Yarmolenko has not played for his club since February 5. After Russia invaded his homeland, he was put on vacation. The Ukrainian international player ranked first 106 times His wife and one of his sons, who fled to Poland from Ukraine, are safe.

After the match against Aston Villa, Yarmolenko allyed Emotional words for his club’s fans and for all of Great Britain. “I would also like to thank the West Ham fans who support me and the Ukrainian people. I would like to thank all the British people because we feel they support us, and I really thank you.”

Britain provides arms and humanitarian supplies to Ukraine. In addition, the country participates in the economic sanctions imposed by the West on Russia and also announced it Stop importing Russian oil by the end of the year. A drastic step that other countries, such as Germany, are not willing to take.

See also  South Tyrolans with chances for medals: the last night of the Olympics - a mix of winter sports

For Yarmolenko, the goal against Aston Villa was his first league goal of the season in his twelfth appearance in the Premier League. His West Ham United plays well in the table: The Hammers are currently sixth and can keep up with big teams such as Manchester United and Arsenal in London. 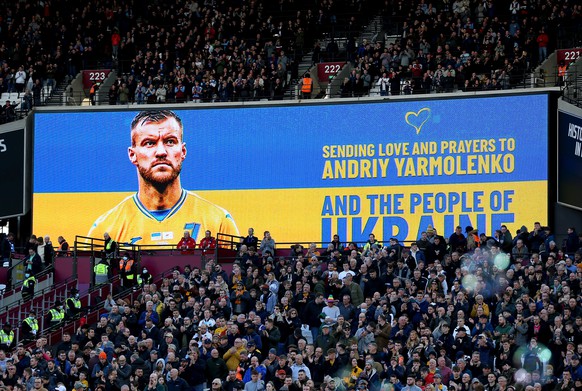 A message in support of Andriy Yarmolenko and the people of Ukraine is displayed ahead of the Premier League match at the London Stadium.Photo: PA Wire / Nigel French

Paris Saint-Germain was frustrated after the 3-1 defeat to Real Madrid. This led to PSG being eliminated from the Champions League. One scene in particular caused an uproar among the losers. It is reported that striker Neymar and goalkeeper Gianluigi Donnarumma clashed in the dressing room.