In Bahrain, the McLaren MCL36 was declared a failure. After that he got good results. Have you underestimated your own car?

a key: The Bahrain Grand Prix was the perfect storm. Of course you judge and make decisions after the first race because it’s your first time facing competition and you’ll get an indication of how good your car is. In our case, the car looked worse than it was. Our braking problems have ruined our entire test before. We couldn’t drive a race distance or prepare the car for the track. Daniel did not participate in the test even because he had coronavirus. Everyone else was able to do it and did the first race better. This is where we are left behind. The subsequent races were an alternative test for us. We did the work that we should have done in Bahrain. We’ve learned how to setup, balance and how high you can drive the car. So all the tasks that there was no time before.

It turns out that the McLaren MCL36 was better than its reputation?

a key: The result in Bahrain painted the wrong picture. When we were able to improve the setup for the next few races, it showed the potential of the car. It looks like we’ve made great progress. We were bad in Bahrain. If Bahrain had been the third or fourth race, we would have been faster on this track.

At the start of the season in Bahrain, McLaren followed him without a chance.

I started a development program right after the race in Bahrain. Would you have done the same if the car had presented itself there as well as later in Melbourne or Imola?

The key: Probably not if we’re still racing under the regulations that have been in place for so long. Then you will have known your car well and correctly classified the result in Bahrain. Now we’re talking about completely new rules. There was no reference before. If our car had performed as well as it did in Melbourne or Imola from the start, we might have reacted differently. We’d say to ourselves: With this car, we’re almost where we were last year. We still have a lot of work to do due to the widening gap between the top and the top. So let’s develop aggressively, but not necessarily change our plan. Maybe we’d build on that concept. But after the opening race, we were not sure if there would be another Bahrain. All we know is that we had to find lap times quickly. So we changed our plan, knowing that it would take some time before we could put the parts on the track. It wouldn’t make sense to just put new parts on the car that wouldn’t have worked at the time. This is the worst case scenario under the cost cap.

So Bahrain was a good wake-up call?

a key: definitely. It gave us a new direction that we wouldn’t have taken so quickly had we started the season better. So we were lucky that the wake-up call came in the first race, not the fourth. Even as we improved in the second race, we knew this car still had weaknesses that we need to work on.

What are the weaknesses?

The key: Under certain circumstances like Miami, we suffer. On high temperatures asphalt or on bumpy tracks with a slippery surface. More in racing conditions than in qualifying. Our tire management from the car side should improve. We’re still a little behind in top speed too. We had to blame ourselves for that. We drove the first five races with only one wing and didn’t have a lot of flexibility. We had a little air resistance there. In qualifying we were as fast as the others in the corners, but lost on the straights. 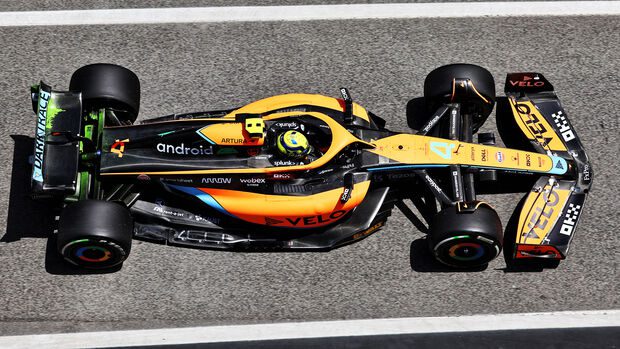 With Barcelona’s promotion, McLaren was able to return to the top of the midfield.

Where did the car get better?

a key: We got a lot better in the slow corners. The balance between fast and slow corners is much better and more consistent. This was also our goal with the opportunity given us by the new rules. Daniel felt more comfortable with this car for the first few races.

McLaren never complained about the bounce. Did you anticipate the problem?

a key: Honestly, there was a lot of coincidence that we were less affected than the others. It is also very difficult to simulate this phenomenon. There are many factors that can aggravate it. Driving in turbulent air, bumps, stiffness of tires and suspension. You have lateral forces acting on the car, as well as the knockout effect of the mechanical setup on the aerodynamics. It is almost impossible to put all this into a mathematical model. If you want to rock the car in the wind tunnel, you’ll have to use great forces for that to happen. Fortunately, we are the best at jumping in. We have a hunch why we don’t suffer like everyone else, but it’s just a hunch.

Could it get worse with more compressive force?

a key: Anyway, things won’t get any better. But it’s hard to predict how bad that will be. It is a function of the aerodynamic map and stiffness of some components. That’s why you see bottom support cables in some cars and not in others. It’s also a function of setting up the suspension because at the end of the day it’s kind of ringing. So it can certainly be turned on when the point where most of the downforce is generated under the car is affected by stall because the distance to the road becomes very small. 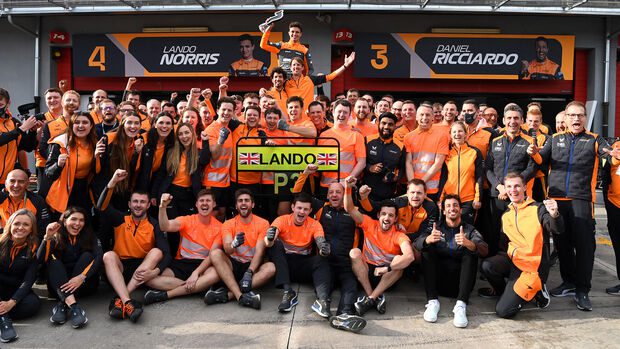 McLaren didn’t have much to celebrate this year.

We’ve seen three major side concepts so far: Ferrari, Red Bull and Mercedes. Did he actually turn out to be a failure or a winner?

a key: I see a trend there. Check out our new sidepods and those from Aston Martin. They go in the direction of Red Bull. The Mercedes way is unique, again different from our old concept, although the side boxes were also very narrow. It’s a very smart approach. I tip my hat to my colleagues at Mercedes for daring to do something like this. But this car works in a completely different way from the rest, but it has great potential.

How difficult is it to further develop the car given the cost cap?

a key: I see it the same way as Ferrari. Anyone who tires themselves early in the season will have trouble from July. We have already invested well in developing the car, but there is still room for improvement. These cars are expensive. We are talking about huge parts being modified. Only the tools needed to build a complete base. The front wing is the same. Regardless of brake vents or mirror mounts, you can always handle large parts in these cars. When building the car, you need to consider how much complexity you are investing in your car. It is more expensive to develop them afterwards. In our case, it certainly wouldn’t end up at the Canadian Grand Prix. But we must also consider whether progress justifies particular development spending.